Residents and staff at United’s Fish Creek community have created close working relationships that have evolved, in many cases, into meaningful friendships.

While employees are traditionally seen as separate from residents because of their role, many staff at United find themselves becoming an integral part of a family’s inner circle due to the relationships they create. 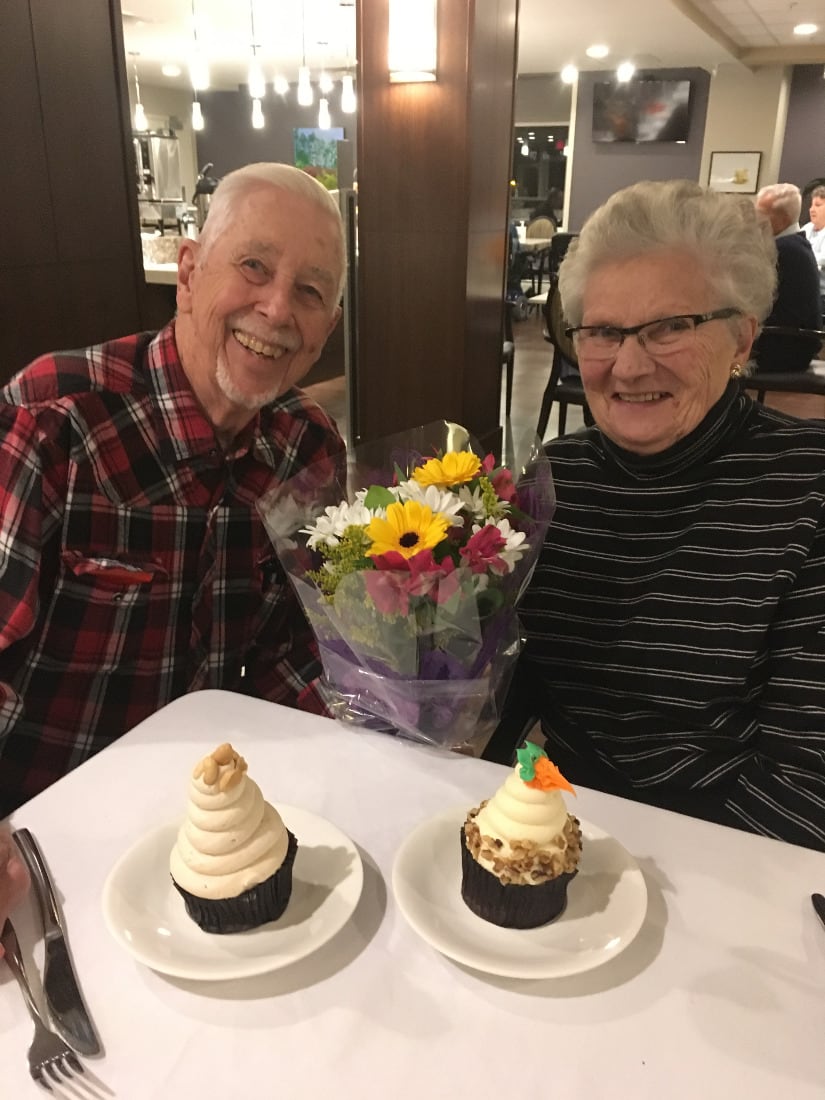 “I’m very impressed with the caring and respect shown by the staff here,” said Conrad Irving, who with his wife Dorothy, moved into Fish Creek North. “It’s hard to put into words, but the relationship with staff has grown deeper. In the couple of years we have lived here, we have found that staff have become more like family.”

Both Conrad and Dorothy are very involved in the arts and music programs that United offers. Dorothy, who is experiencing memory issues, is also part of United’s unique United Minds program.

“I was one of their first contacts when they moved into Fish Creek,” said Becky Robertson, United Minds aide. “We built up a trusting relationship and I feel a deep connection with them. They are very welcoming people and I feel that I’m part of their family.”

“I would adopt her if I could!” laughs Conrad. “She is more than simply a staff member. There is such energy and compassion in the time she spends with Dorothy.”

Becky is one of several staff members that Conrad and Dorothy consider as close friends. Jeanette Padilla is another. She became involved with United more than eight years ago, first as a volunteer in the art studio at Garrison Green, then she moved full time into food services.  “I treat everyone with TLC (tender loving care), like they are close family members,” said Jeanette, Lead Server at Fish Creek. “If Dorothy usually comes in for a meal, but misses a day, I always ask if everything is okay. It’s important to me that the residents are happy and comfortable.”

Jenny from the nursing department, who comes in each morning to help Dorothy get ready for the day, and Kim Coulter, who oversees the programming at United are also counted as close friends.

“Jenny has become part of our family,” said Conrad. “I hear Dorothy and Jenny laughing and that starts our day off on such a positive note. As Dorothy’s main caregiver, I always put her needs first and sometimes forget about mine. But with Jenny here, her presence and support is invaluable.”

“Every time I come in to work, I look forward to connecting with our residents. Dorothy is special to me. I treat Dorothy and all the residents as I would my own family,” said Jenny. “I always bring a smile and laughter. I want to make each day a good one for them!”

Conrad also considers Kim Coulter a good friend. “With Kim, I can speak with her about anything I might have on my mind. She is a terrific listener, and always has a way of giving me the right advice just when I need it.” 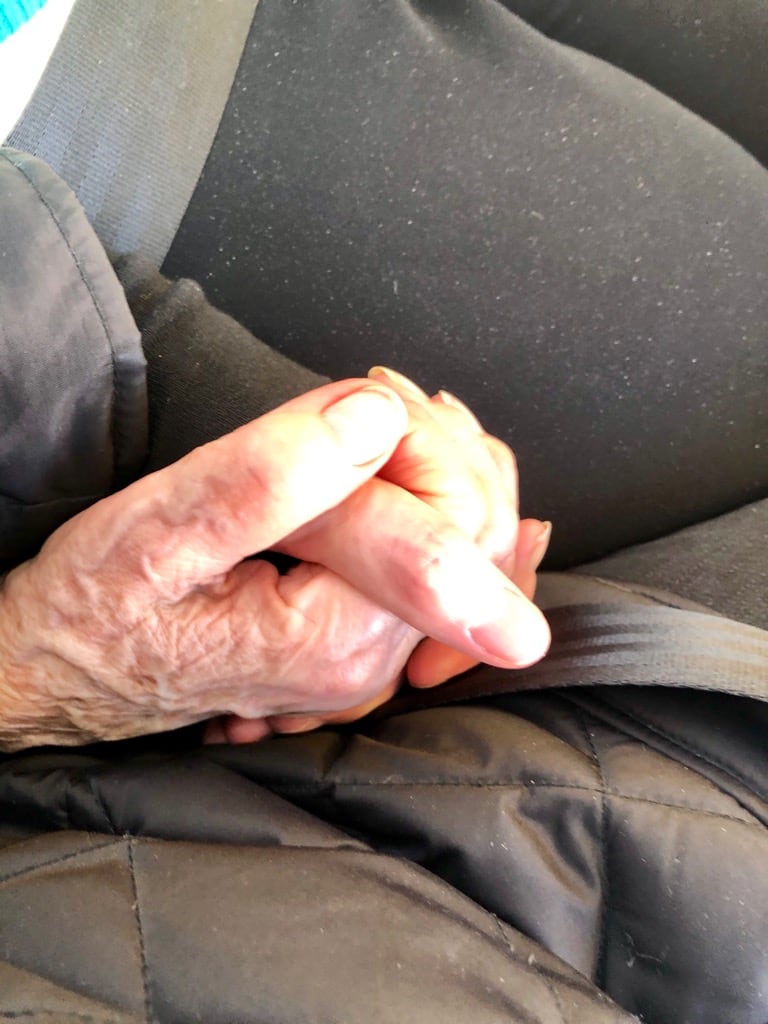 Kim said that building trust and truly caring about the residents is what leads to meaningful friendships. She recalls a time when a new resident was reluctant to go on an outing. She agreed to go but only if Kim went with her. The two held hands the whole way and the resident was glad she had made the trip. That small gesture opened the door for the resident to go on more outings and explore new things.

Kim, Conrad and Dorothy have built a similar friendship, and she is honoured that Conrad trusts her to share his concerns. “He is very supportive of the programming work that we do. The programs are based on what the residents want so their input is very important. The residents are so involved in everything. Building friendships and trust – it’s a two-way street and a big part of what strengthens our community as a whole.”

“The staff at Fish Creek have made our stay here enjoyable,” said Conrad. “They really care about us. They just want to be here for us, and that has become something special for our family. Coming to Fish Creek was a lifestyle change for us, but the staff has gone above and beyond to make our new home enjoyable and comfortable. I can’t say enough about how positive that’s been for us.”

“There are some people in life that make you laugh a little louder, smile a little bigger, and live just a little bit better.” – Anonymous

What began as a simple, friendly gesture has turned into a close friendship.

“I was sitting down for dinner in the dining room, when I noticed a new lady with a beautiful smile come in,” recalls Fish Creek resident Sheila Brinsmead. “I know how difficult it can be to come into a room full of strangers, so I got up and invited her to sit with us. We got to talking and that’s how it started.”

Joan Patterson, who had just moved into Fish Creek was recovering from a broken shoulder after a fall. The same thing had happened to Sheila, so they had a connection to get to know each other. The two have become “sisters from another mother”, as Joan likes to say, and they often eat their meals and attend concerts and outings together.

“I don’t think we would have connected like we did had we lived in a place that had assigned seating at mealtimes,” said Joan. Sheila agrees. “The freedom to choose where to sit and with whom to eat really opens the door to meeting new people and finding new friends.”

Sheila, who is an accomplished artist who has participated in art shows with her daughter, moved into Fish Creek in March of 2017, just a few months before Joan moved in.

“I was recovering from my broken shoulder, and it became clear that living in my home with several flights of stairs wasn’t going to work for me any longer,” said Sheila. “My family drew up a short list of places for me to consider and I knew that Fish Creek, with it’s professional art studio, was the place for me.”

“For me, I made the decision to move on my own. I fell at home and broke my shoulder. My daughter lived next door and just happened to be there so she could help,” said Joan. “I realized that I should move into a community where I could get help right away should something like that happen again.”

The two of them are independent, make their own decisions and pursue their own interests. They take advantage of the many concerts and other programs that Fish Creek offers. “Just last week we attended three performances!” said Joan, who is an ardent quilter and music enthusiast. “We have met so many people here. Because of that, we don’t always sit together. We each keep so busy there are times we don’t even see each other, but we always find time to get together.”

“Fish Creek has so many programs. It’s a marvellous place for learning,” said Sheila. “As well, I really like the idea that everyone is included. You’re not separated by physical or memory issues that limits your association with other people. Here everyone is encouraged to mingle. I like that.” 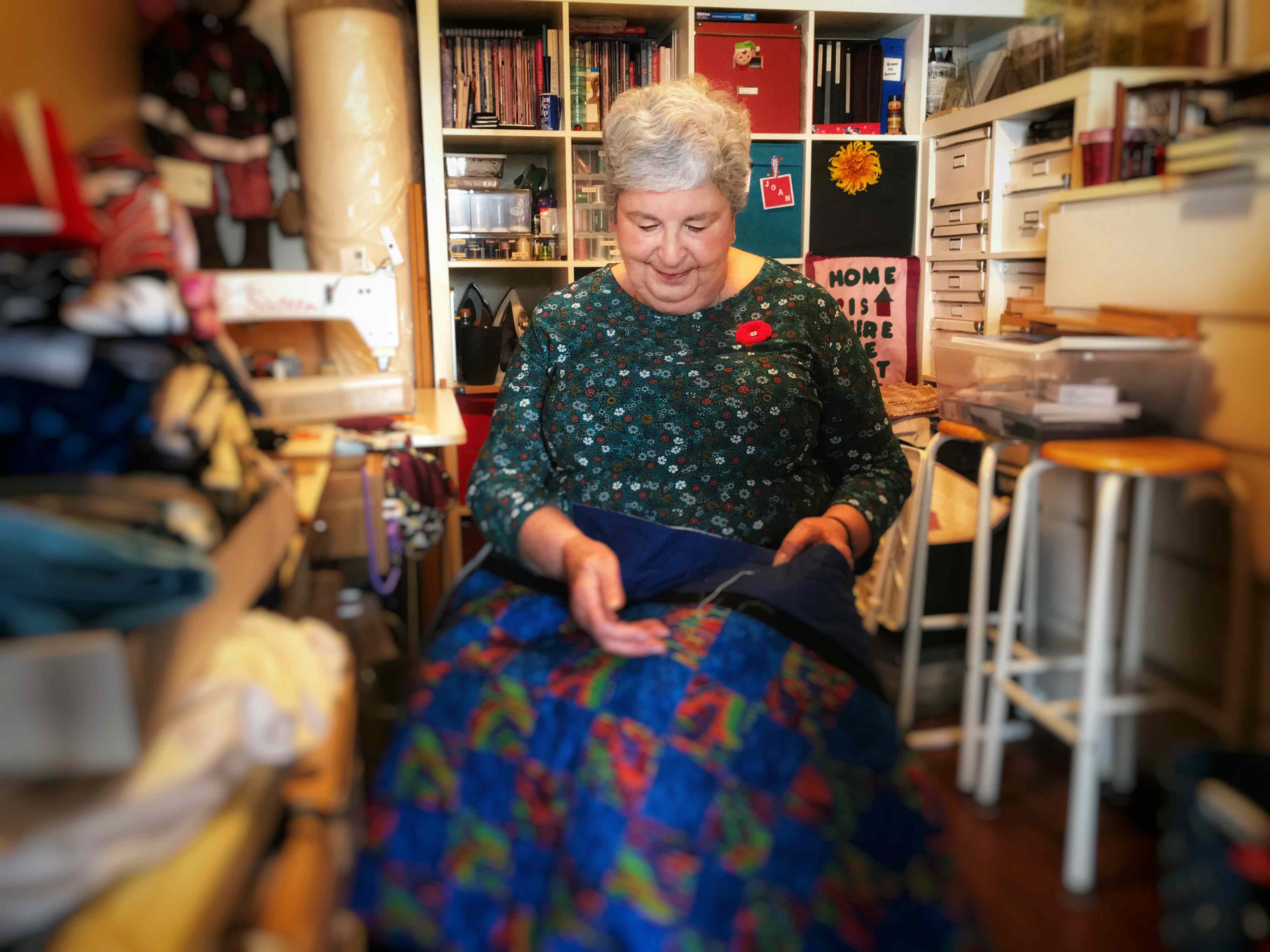 Joan has a corner of her suite where she creates her quilts, and Sheila works in the art studio, often alongside her daughter, who comes to visit and paint with her. “We cheer each other on,” said Sheila. “Joan makes such beautiful quilts. That’s nothing that I could ever do!” 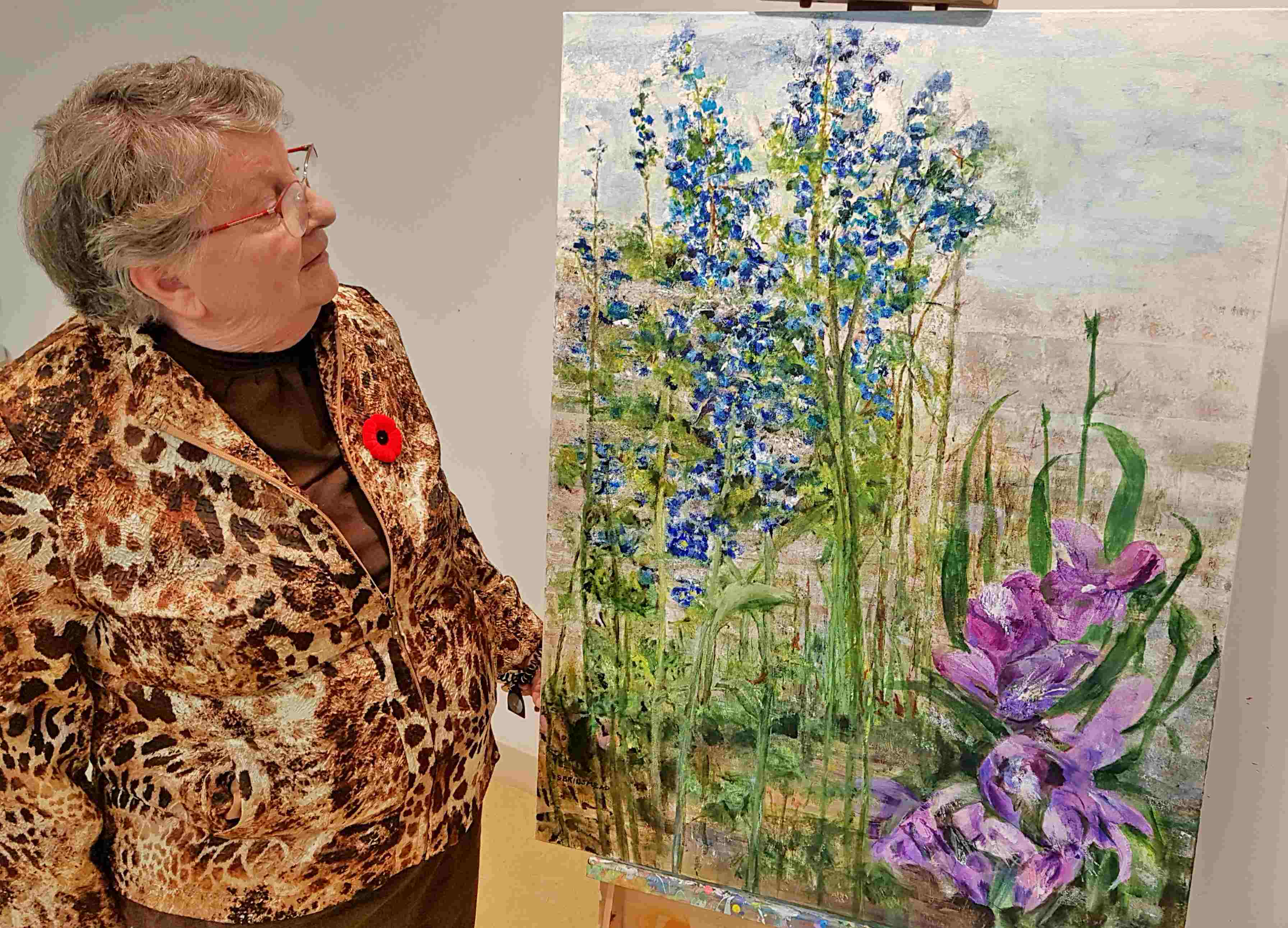 Standing in the art studio next to her most recent painting, Sheila, who has been an accomplished painter for more than 20 years, has nothing but admiration for the space and the creative facilitators, who are all professional artists. “This is one of the best studios – the space, lighting, instructors – it is so well equipped.”

“I really like Sheila’s work,” said Joan. “Once I finish my latest quilt, I’m going to try my hand at painting. I did try pottery and it was a lot of fun. It’s always interesting to try new things.”

What’s next for this active pair? Both Joan and Sheila are working with St. Mary’s University students in a life writing project, and Sheila is working towards an art show that she and her daughter are involved in next spring. Joan is putting the finishing touches on her latest quilt. And, oh, isn’t there another concert to attend this weekend?