A full house greeted Mount Royal University (MRU) professor Duane Bratt at United’s Fish Creek community this week. Duane, a professor of political science, was invited as part of United’s partnership with MRU, and the community’s focus on lifelong learning. He focused his talk on the recent civic and federal elections and their impact on Alberta.

“The civic election underscored three themes – change, diversity and a rebuke of the provincial United Conservative party,” said Duane. New mayors in Calgary and Edmonton are both of south Asian descent, and the new Calgary mayor is the first woman to hold the seat. Calgary’s city council reflects more closely Calgary’s ethnic diversity, and the rejection of Conservative candidates by voters and the election of school board candidates who reject the UCP’s draft education curriculum shows a rebuke of UCP policies.

Duane also discussed the two referendums – Daylight Saving Time (DST) and Equalization. “DST will likely be rejected. While people don’t like to reset their clocks twice a year, they really don’t want winter darkness until 9.30 a.m. And Equalization was a major plank in premier Jason Kenny’s election platform, and it looks like it will pass, but without the resounding majority he was looking for. What Albertans want is a fair deal from Ottawa, but not necessarily through a removal of equalization from the constitution.”

Duane noted that Kenny’s approval rating has dropped to 20%, which is the lowest in Canada for a premier, and almost all of it due to the government’s response to COVID. “The UCP is very concerned about the rating, especially with a year and a half to go before the next election.” A leadership review is planned for next April, but may come earlier. 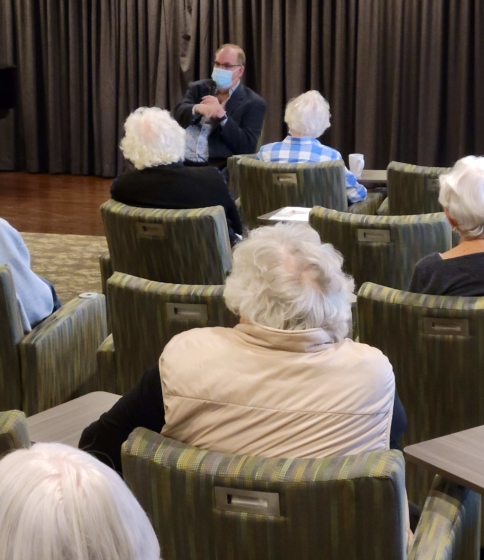 Residents were keen to get Duane’s thoughts with a number of questions: The accuracy of polling; the influence of the People’s Party of Canada on the federal election outcome; what happens with equalization now; the political split between Western and Eastern Canada; the reduced interest in voting; and how COVID is creating alienation between those who are vaccinated and those who aren’t.

“It was very informative,” said Elaine, a Fish Creek resident. “It was interesting the way he presented the issues and how he clarified the complicated ones.”

Resident Hugh said, “It was superb, excellent. Clearly the size of the audience shows the level of interest that people have in the issues.”

Duane speaks with residents of Fish Creek and Garrison Green (whom he meets with next week) a couple of times a year, and he says the questions and the high attendance clearly show that seniors have a keen interest in politics.

“This was a very engaged audience,” said Duane. “There were some very insightful questions. There is so much going on in politics right now, and a large number of ‘hot button’ issues. I look forward to speaking with the Garrison Green residents next week as I expect there will be a high level of interest there as well.”

Don’t hesitate to talk with one of our active living advisors about life in a United community. They can arrange for a tour at your convenience. If you know a friend or family member who could benefit from living in a United community, send them a link to our website or blog, or arrange a future visit. We are happy to help!