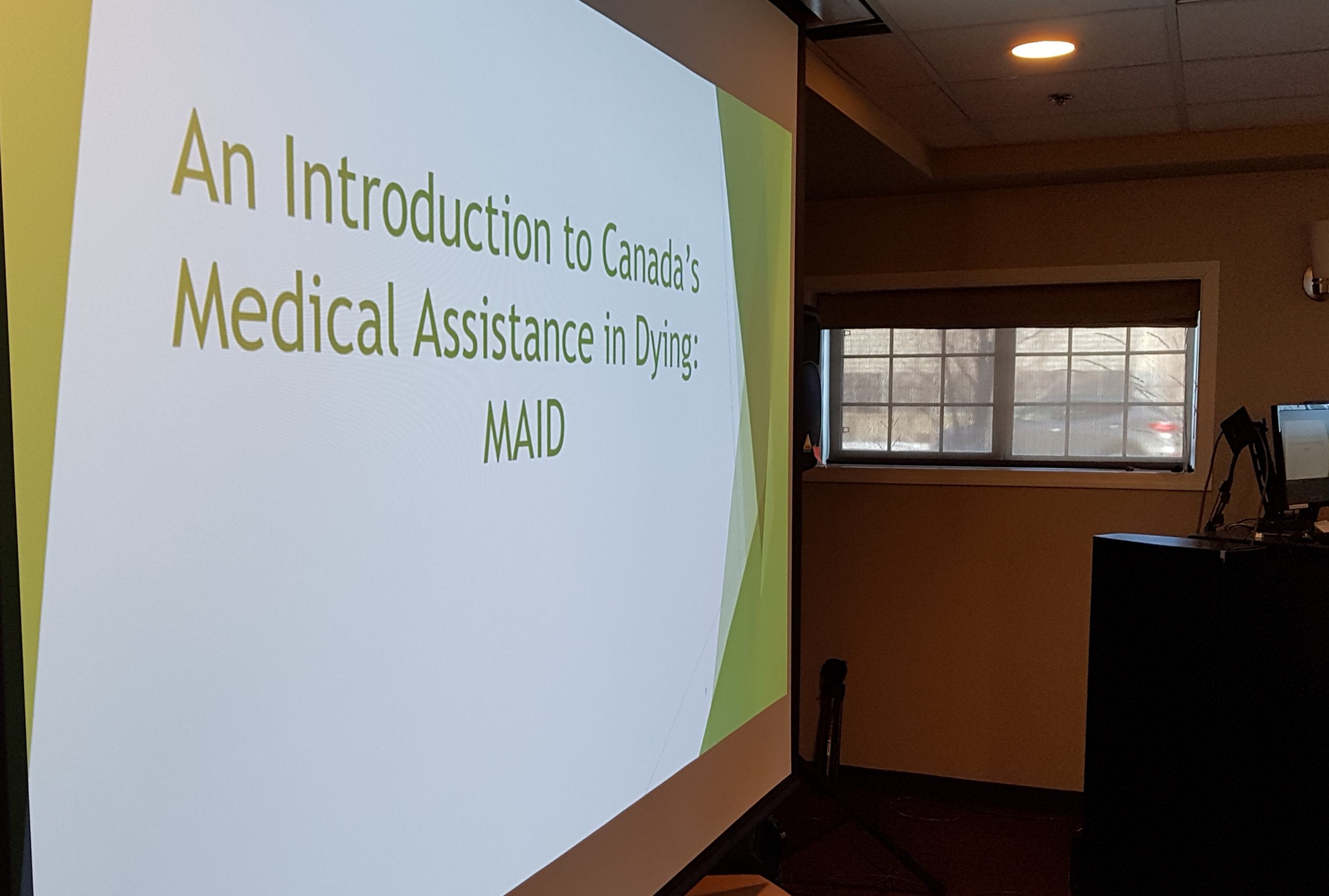 United’s staff at Fish Creek and Garrison Green were briefed this month on federal legislation around MAID (medical assistance in dying), which was passed by the government in 2016. MAID is a medical procedure that involves the administration of medications to end someone’s life, whose death has been diagnosed by a physician as being “reasonably foreseeable” and who has independently chosen MAID be performed. Learn more about MAID in this federal government link. Most Canadians support MAID according to recent polls. Even so, statistics show that only 2% of deaths in Canada are through MAID.

While United staff won’t be administering the procedure, they were informed about how the process works as part of United’s philosophy of continuing staff education.

MAID is supported by Alberta Health Services. Here is a link to more information. Quebec was the first province to implement MAID.

There are two ways to administer medical assistance in dying. Each involves a physician or nurse practitioner who either directly administers a medication through intravenous means, thus causing death, or provides or prescribes a drug that the person takes him/herself.

“I’ve always held the concept of controlling my life and my death,” said Fish Creek resident Trish Remmers. Trish is a member and co-founder of the Calgary chapter of Dying with Dignity Canada (DWDC).

She invited DWDC colleagues Sigrid Wili and Trudy Hall to assist her in providing information to staff about MAID – who is eligible and how it works. 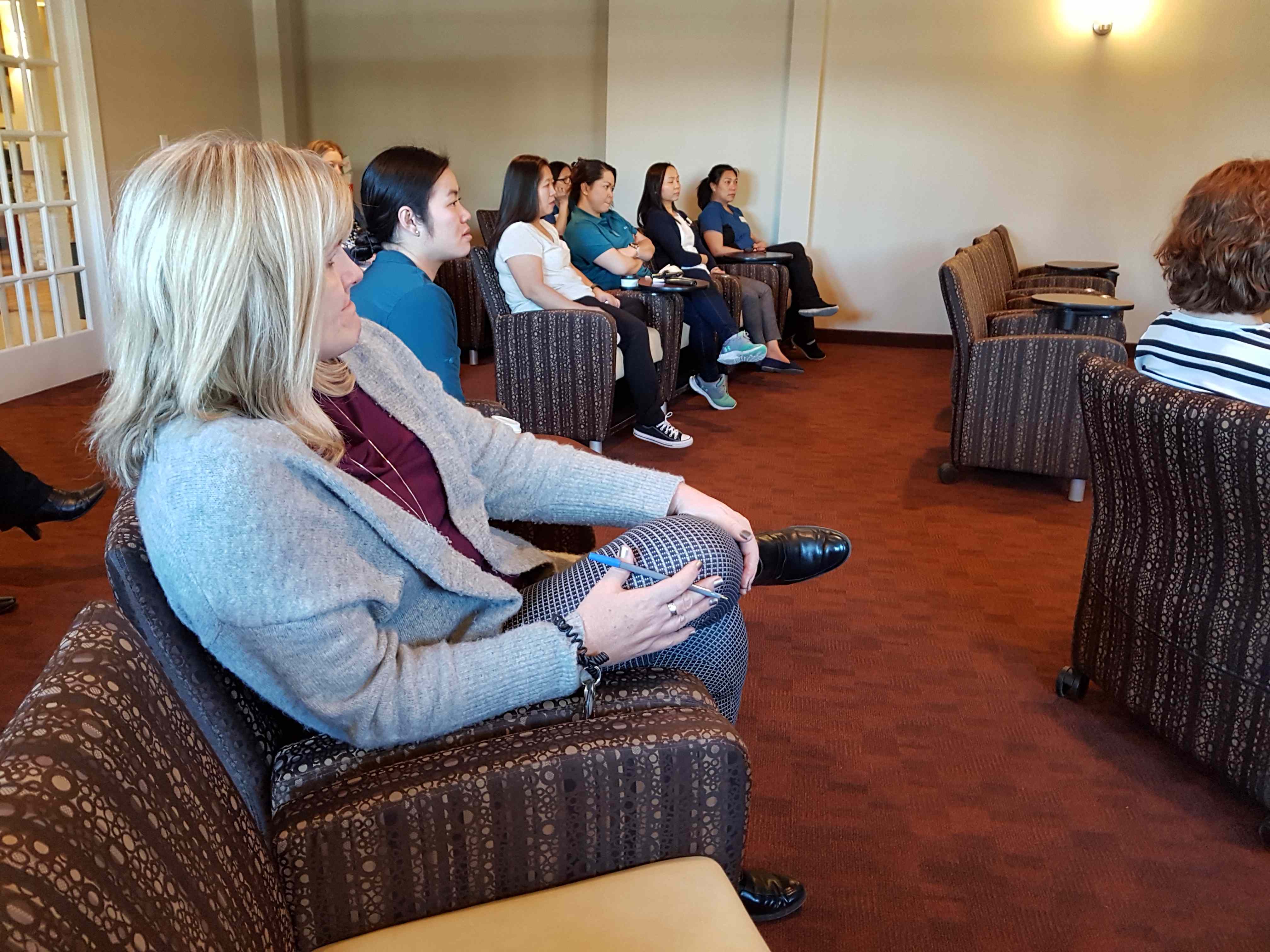 Sigrid, also a member and co-founder of the Calgary chapter,  believes MAID can relieve a great deal of suffering as a person nears the end of life. She explained that the dying process used to often take a shorter time than it does today, but with today’s medical advancements, a person can stay alive much longer. That may  also mean suffering can be extended. If quality of life declines to that point, a person now has another choice to prevent a long dying.

As legislation now stands, to access the procedure, a person has to be mentally competent throughout the entire process. It can take up to two weeks to receive approval, which gives plenty of time for a person to change his/her mind.

Trish acknowledges that talking about death is tough, but it is something families should do. “People are talking about death more. They are becoming more comfortable with it. Family members can have different views but it really comes down to what the patient wants. Each province has an advanced care planning kit with various scenarios that can help families think through the process.”

Sigrid said a family discussion can help in the grieving process. She thinks grieving can be the same for families whose loved one chooses MAID or not, or it can be different depending on whether the family has held those important discussions beforehand. In some cases, it can be a relief that the person is no longer suffering. It makes a big difference in how family comes to terms with death especially if it has been discussed and the family is prepared for it. Each case is unique.

Trudy Hall, also an active member of the Calgary chapter said that she likes having a choice in how she lives and how she will die. She continued to say that we don’t actively promote MAID, but we support those who want it by providing witnesses for the applications and helping to walk them through the process. People should have the choice.

There are some who object to MAID, such as those who live a faith-based life or object on other moral grounds, but MAID gives a choice to those who are open to the idea.

What about those patients who are no longer mentally competent? “DWDC is working on getting federal legislative approval for advanced requests for those who are of sound mind now, but who may have dementia and not be in a position to approve the procedure in the future,” said Trish.

Others who have a longer illness, such as cancer, may have had more time to think through their options,” explained Sigrid. “Once a request is submitted, a person has a year to act on it before having to submit a request and receive approval.”

Ask us about our short-term respite stays.

Do you know a friend or family member who could benefit from living in a United community? Send them a link to our website or blog, or arrange a visit. We are happy to help!