Residents Remember Those Who Served

Remembrance Day was a low key affair at United’s Garrison Green and Fish Creek communities but we were still able to honour those who served through several small gatherings at Garrison Green, which gave residents an opportunity to remember their friends or families, who served in the military, in a more formal setting. Residents recited the poem, In Flanders Fields, which inspired the red poppy we now  associate with Remembrance Day, and laid poppies on a wreath. 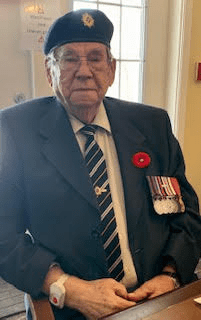 Lex Davis recalls joining the military in 1943 when he was just 15. His regiment was based out of Moncton, New Brunswick with the 19th New Brunswick tank regiment and he did his Pacific training in Vernon, B.C. He travelled all over Canada during his time in the Canadian services and also spent time in Washington D.C. and Germany later in his career. Lex spent a year serving in the Vietnam War as an observer from 1964 to 1965. He retired from service in 1975.

He wasn’t involved in combat, but he recalls one time when he came face to face with the enemy. “Two of us were patrolling a section on the East Coast when we saw a U-Boat surface. As we watched, a man got into a dinghy and rowed to shore. When he got out we confronted him, and he surrendered. We called the RCMP who took him into custody.”

“I thought the ceremonies at Garrison Green went very well. They are always emotional for me,” he said. “It’s very important that we observe Remembrance Day. I haven’t missed any. We used to always go to the military museum for the ceremony, but this year made it difficult to do that.” 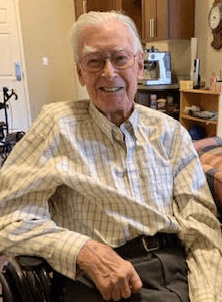 Nigel Way joined the British Army when he was 18. After completing his basic training he joined the Royal Signals Regiment. He spent three years in the army. He immigrated to Canada in 1955 where he became an electrician, working for the Calgary Board of Education.

“I was quite young when the war started,” he recalls. “All of my family served in the British military. I had two brothers and a sister in uniform. I lost a brother and a cousin in combat. When I signed up, the war was coming to an end so I didn’t see combat. It’s absolutely important that we  remember those who lost their lives. I have great admiration for those in the military today. War changes a person, so it takes great courage to be part of the military and ready to serve.”

Take a look at our new commercials: Opportunity and Community

Talk with one of our active living advisors about life in a United community. They can arrange in-person or virtual tours of our Garrison Green and Fish Creek communities. If you know a friend or family member who could benefit from living in a United community, send them a link to our website or blog, or arrange a future visit. We are happy to help!