Kieran Corrigan has always looked up to the late Nelson Mandela. “I like his character,” said Kieran. “He accepted everyone, disability or not. There was no prejudice.”

This month, the Special Olympics National Summer Games were held in Antigonish, Nova Scotia. Kieran ran in several events but his winning performance came in the 1,500 metre race. It was a gold medal run, but it took a heroic effort on his part to pull off the win. “This was my first time running in the Nationals,” he said. “I had been training hard for it and was in the lead when I pulled a hamstring in the last 100 metres.” While it slowed him down, he pushed for the finish line and beat his nearest competitor by just under one second to take the gold. You can watch the final seconds in this video.

Kieran has worked at United’s Garrison Green community for two years. His dad, Bob Corrigan, had spoken with Kelly Johansson, director of human resources, and suggested a volunteer position. But it was soon clear to everyone he worked with that Kieran had earned a more permanent position. He is an invaluable part of the kitchen team, handling dishwasher and food prep duties.

“Every day is a gold medal performance for Kieran,” said Garrison Green chef Ryan Chisholm. “He’s one of my hardest workers. He’s always positive and is an important part of our work environment. We would be lost without him. I was very happy when Kieran won the gold, but I wasn’t really surprised. I see that focus in him every day.”

Kieran started playing soccer when he was six and played until his teens when he switched to running. Bob, himself a long-distance runner, helped Kieran with his pacing. Often, the two run together to the local Starbucks for coffee. A literal coffee run! You can read more about Kieran in his Special Olympics bio. 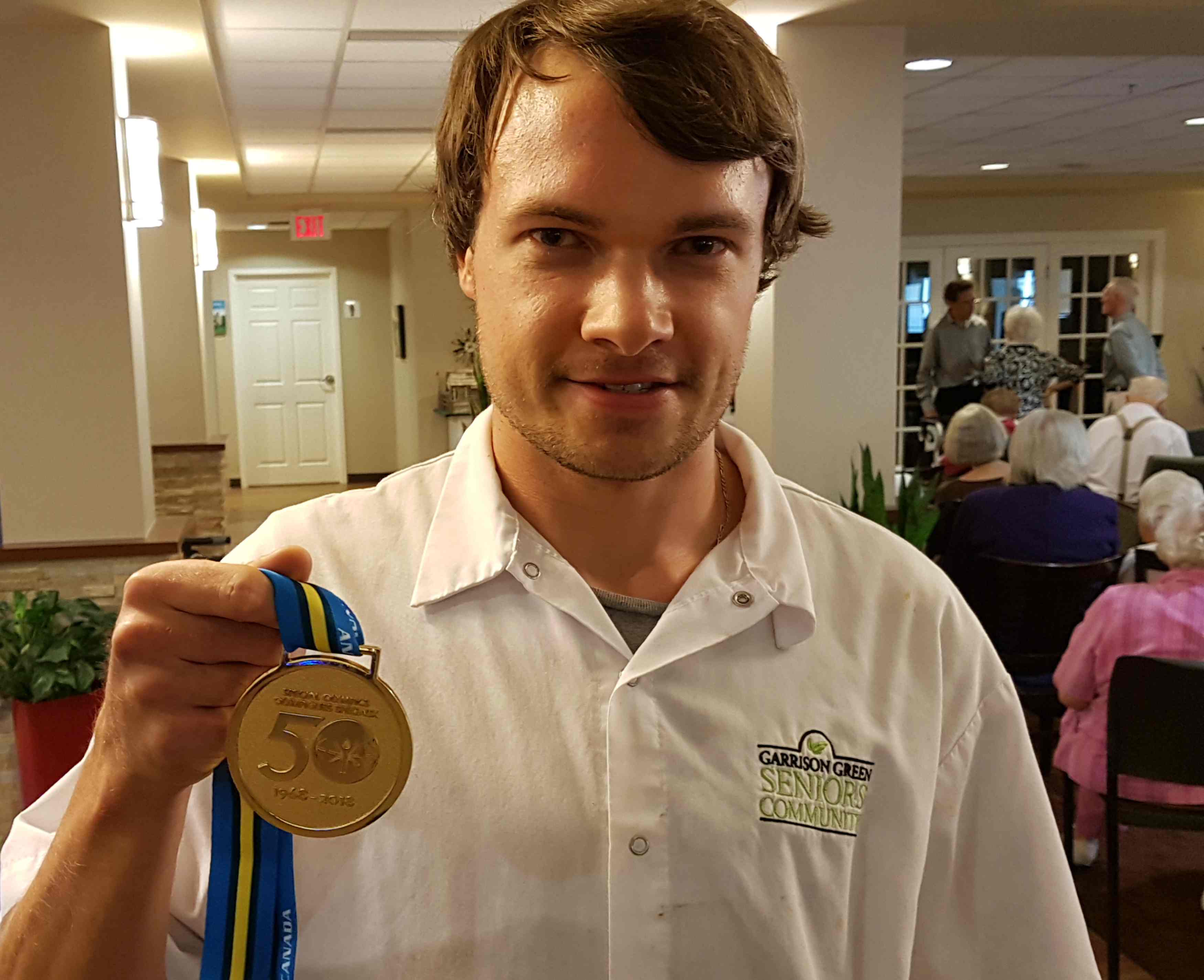 At an event at Garrison Green last week, Kieran brought his gold medal to work to show to residents. After his success in Antigonish, where does he plan to go next?  He has set his sights on alpine skiiing in the Special Olympics Alberta Winter Games in February. The ultimate for Kieran would be to qualify for the Special Olympics World Games.