Kimberley-Ann Bartczak has been named by Calgary Opera as its latest resident conductor and repetiteur, or coach for the Opera’s singers.

She brings plenty of experience to her new role. Originally from Montreal, she is also on staff at Opera on the Avalon in St. John’s,  Newfoundland. She has also worked in other Canadian cities, in Italy and Germany. In Calgary, while preparing the mainstage productions during rehearsals, coaching the principal actors and assisting the conductors, Kimberly-Ann will conduct Calgary Opera’s Christmas at the Opera, a Choral Extravaganza running Dec. 1-3, which features artists from the emerging artist development program.

Currently, she is assisting former resident conductor Christopher Topher Mokrzewski, who will be conducting the Barber of Seville, which starts Nov. 18.

“I have two roles as resident conductor,” explains Kimberley-Ann. “I am head pianist for all of the rehearsals, and I play with the orchestra during the shows when necessary. As well, I assist the conductor, which is a great learning opportunity as I transition into the role of conductor.”

Kimberley-Ann is well aware that female conductors are still rare in Canada. “I see myself as a conductor, not as a female conductor. It really comes down to how you interpret the music and how you communicate your ideas around the music. The whole idea that conducting is a male profession is changing.” 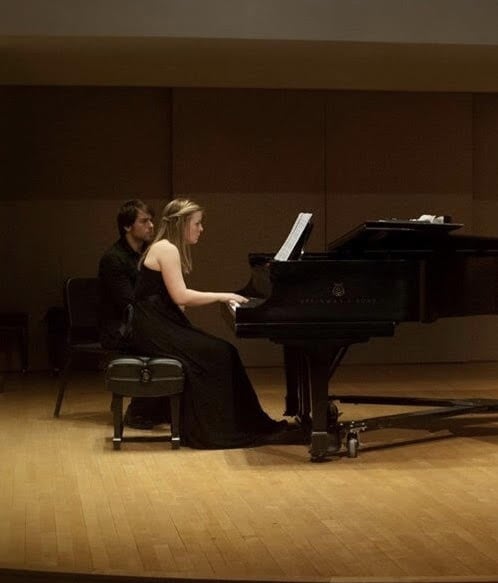 She became interested in opera in her late twenties. Now 34, she has embraced the art form. “I was mostly into the choral community, but when I saw my first opera I was taken by the singing, acting, dancing, the orchestra and the whole spectacle of it. An opera is such a huge show, a real collaborative effort involving a lot of people.”

She is a big fan of introducing opera to a young audience. “To really appreciate opera, young people need access to the various elements of the production. I’m a big advocate of bringing opera to them in the classroom. Opera connects with an audience on so many levels. We just need to do more of it.”

As well, she appreciates the intimacy of performing for a small audience. She will be speaking and performing for United’s Garrison Green residents January 29.

“Calgary Opera is an important partner of ours, and we are particularly pleased to be sponsoring Kimberley-Ann as resident conductor,” said United music director Jill LaForty. “With her visits to our communities our residents will have a special opportunity to build a relationship with her over the duration of her appointment. And United’s philosophy is all about remaining active and creative in your later years. We appreciate that Calgary Opera both brings opera directly to our residents in-house and gives them an opportunity to attend their productions at the Jubilee. We have some real opera buffs who not only love the Calgary Opera performances but who also take advantage of excursions to the Metropolitan Opera Live in HD which are shown regularly on the big screen at Chinook Theatre.”

Kimberly-Ann looks forward to achieving her goal of becoming a conductor. “My transition to conductor is already happening. I’m learning so much by assisting the conductors and in my role as repetiteur. The role of conductor is all encompassing. They need to know each instrument in the orchestra and how that sound fits into the bigger picture. There is so much involved, and I’m looking forward to learning everything I can about the role over the next few years here at Calgary Opera.”