Choosing to live at United’s Garrison Green was a natural one for Rolande Parel and husband Anthony. United’s art programs and well-equipped art studio allowed Rolande to continue to focus on her artwork.

She learned to paint as a child while under the watchful eye of several of the prestigious Group of Seven painters who were interested in encouraging artistically talented children. Eventually, she found she had a natural talent, which she continues to put to use in her new home.

“My family moved from Montreal to Vancouver when I was in grade one,” said Rolande. “I took the ferry to Victoria every Saturday morning to attend a children’s art school, which was supported by members of the Group of Seven. They weren’t famous at the time, but I remember I used to paint floral pictures a certain way, which they liked and encouraged.”

The Group of Seven were among Canada’s most famous artists. They came together in 1920 and continued until 1933. 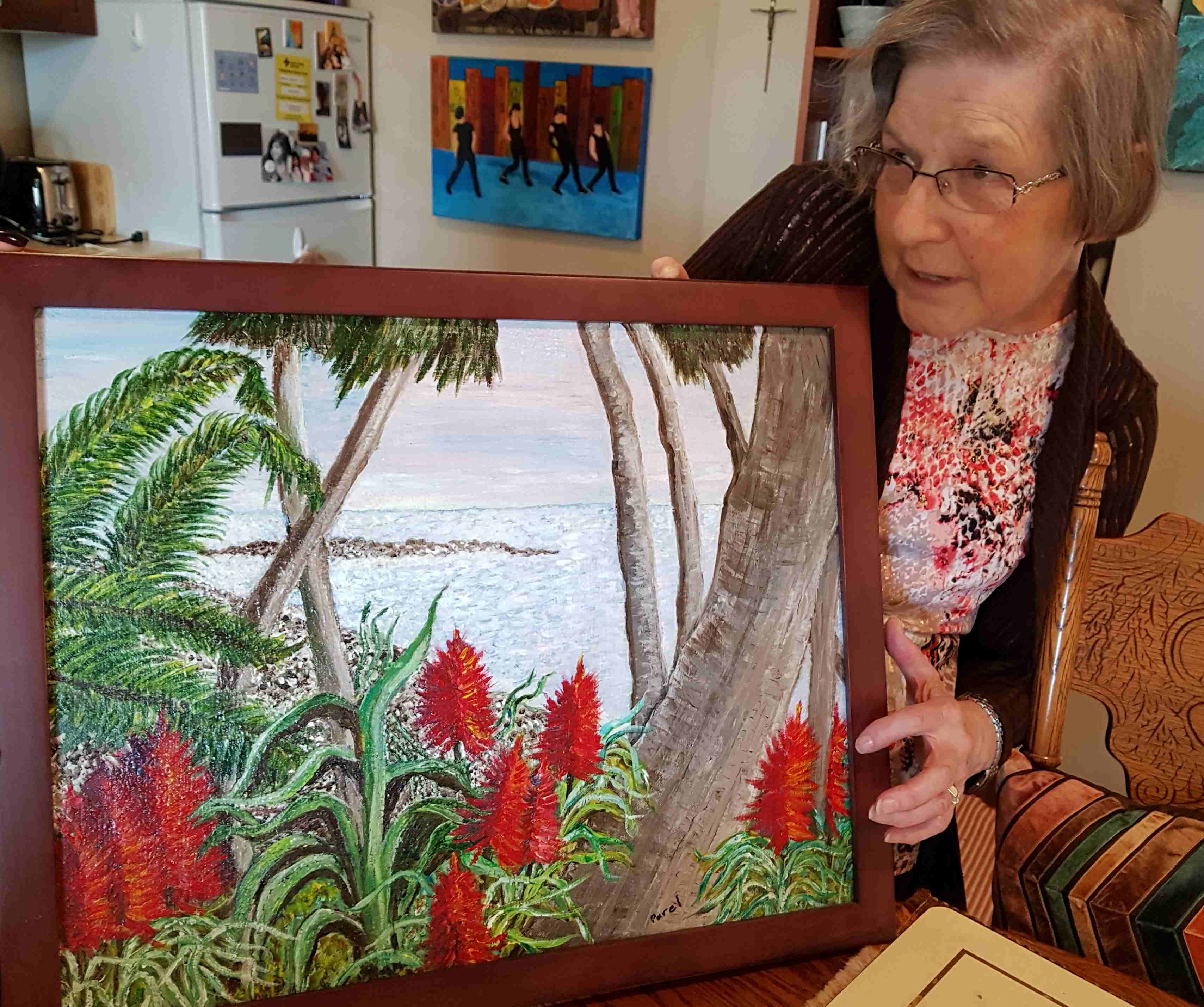 When the members of the Group of Seven weren’t available, their wives taught the classes. “When my family returned to Montreal a couple of years later, J.E.H. MacDonald’s widow gave me three postcards of his and other members’ paintings, wishing me the best in my art pursuits. Those postcards are among my most treasured possessions.” While in Montreal Rolande continued to follow her interest in painting at the Montreal Museum of Art where Arthur Lismer, also of the Group of Seven, directed the classes.

In those early years, and for a short time after, Rolande modelled her painting style after the Group of Seven, who developed a unique Canadian landscape style. Eventually she became a teacher, and taught art classes, as well as other subjects, at Strathcona-Tweedsmuir school in Okotoks, and later for the Calgary Separate School Board. “However, I always used my artistic training as part of my teaching method as a way to illustrate concepts,” said Rolande.

She learned about United’s approach to the creative arts while visiting Garrison Green with a friend, who was lecturing on creative aging. “We came to live here in 2018 after I broke my hip. We couldn’t live in our home anymore because of the stairs. We looked for a place that had an art room that was cozy and welcoming,” she said.

“I started with the techniques I learned as a child, but when I came here I felt free to expand and develop my own style. It was United’s creative facilitators, who are all trained artists, who were instrumental in challenging me to express myself beyond what I had been doing.”

United has been described by another resident as “heaven for artists”. Rolande agrees, and she has developed deep friendships with several other artists. Their circle is growing as more people show an interest in developing their creativity. “You can’t teach creativity. It comes from within,” said Rolande. “But you can create an atmosphere where it is able to flourish. The facilitators provide such an atmosphere.”

Rolande continues to paint whatever strikes her imagination. “Sometimes I’ll go back to the Group of Seven style I grew up with, and I’ll paint a landscape or flowers. Other times it will be interesting things my children or grandchildren are doing – a snowball fight or a dance class. When you have a scene in your imagination and it comes out the way you think it should, that is very satisfying.”

For Rolande, that feeling of making her imagination come to life never gets old.

Ask us about our short-term respite stays and other short-stay options.