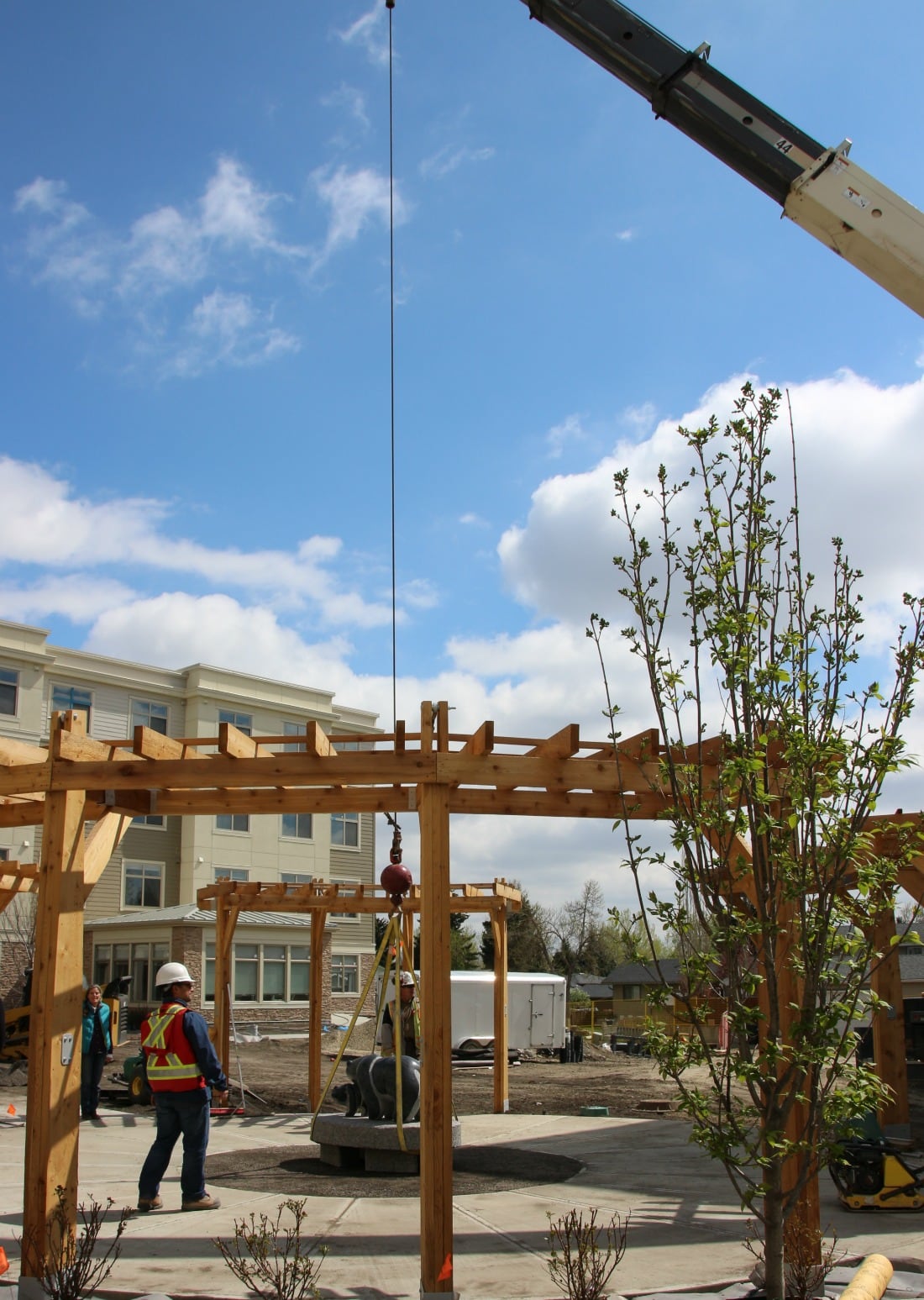 The bear and cub sculpture is a 3,500 lb. granite work of art by sculptor Stewart Steinhauer that was placed by crane into the community’s new courtyard, which is due to be completed in May.

“The sculpture is our first major addition to our newly created United Collection,” said Gail Hinchliffe, president, United Active Living. “The collection is unique for an older adult community. There is nothing else like it anywhere. As it is developed, it will feature sculptures and other fine artworks from major Alberta artists, including works donated by residents and staff, which we will make available to the public from time to time in our courtyard and in our art gallery.”

Gail says United will add several large sculptures to the courtyard this spring, as well as paintings and other pieces of art that will be displayed in the community’s art gallery, throughout the Fish Creek community’s two buildings, and at United’s Garrison Green community.

“We are finding that exposure to artwork, and involving the residents in creating their own art is a highly effective way to stimulate the mind, especially for those living with memory loss,” said Gail. “We include those with memory loss in all of our activities, and having these unique art pieces in the community will benefit everyone.”

Bears Have a Special Meaning to Artist

For Steinhauer, the bear holds a special place for him. While taking part in a Cree ceremony, he had a vision of a stone bear. Since then, carving bears has taken on a special meaning. “When I carve a bear, I can ‘see’ the bear in the stone as I drill/saw/grind/hammer down to it, no matter the shape of the raw stone block. For me, the bear is a spiritual being with a powerful teaching to share. The bear symbolizes the relationship between human beings and the earth. When I’m carving, I enter an altered state where the stone is working with me as much as I’m working with the stone.”

Steinhauer began sculpting in 1973. During the 1990s he produced 21 exhibitions of his work throughout Canada. His ancestry includes Scottish, Irish, Cree, Anishnabe and Mohawk. He lives at the Saddle Lake Cree Nation N.E. of Edmonton, and maintains studios on reserves in B.C. and Alberta.

The sculpture was purchased from Canada House Gallery in Banff. Owner Barbara Pelham is proud to support Steinhauer’s work, and to have one of his pieces at Fish Creek. “At first glance, Stewart’s work is about nature. By capturing a tender moment between mom and cub, his work is also about family. But on a deeper level, Stewart’s work is also about his knowledge of and respect for his Cree heritage. As the Cree are indigenous to Alberta, it’s fitting that the Cree have a presence within Calgary’s contemporary environment. We hope that Stewart’s sculpture will draw people together to talk, to be friends and to be a core for the community for decades to come.”