Author Expands Her Creative Side at Garrison Green 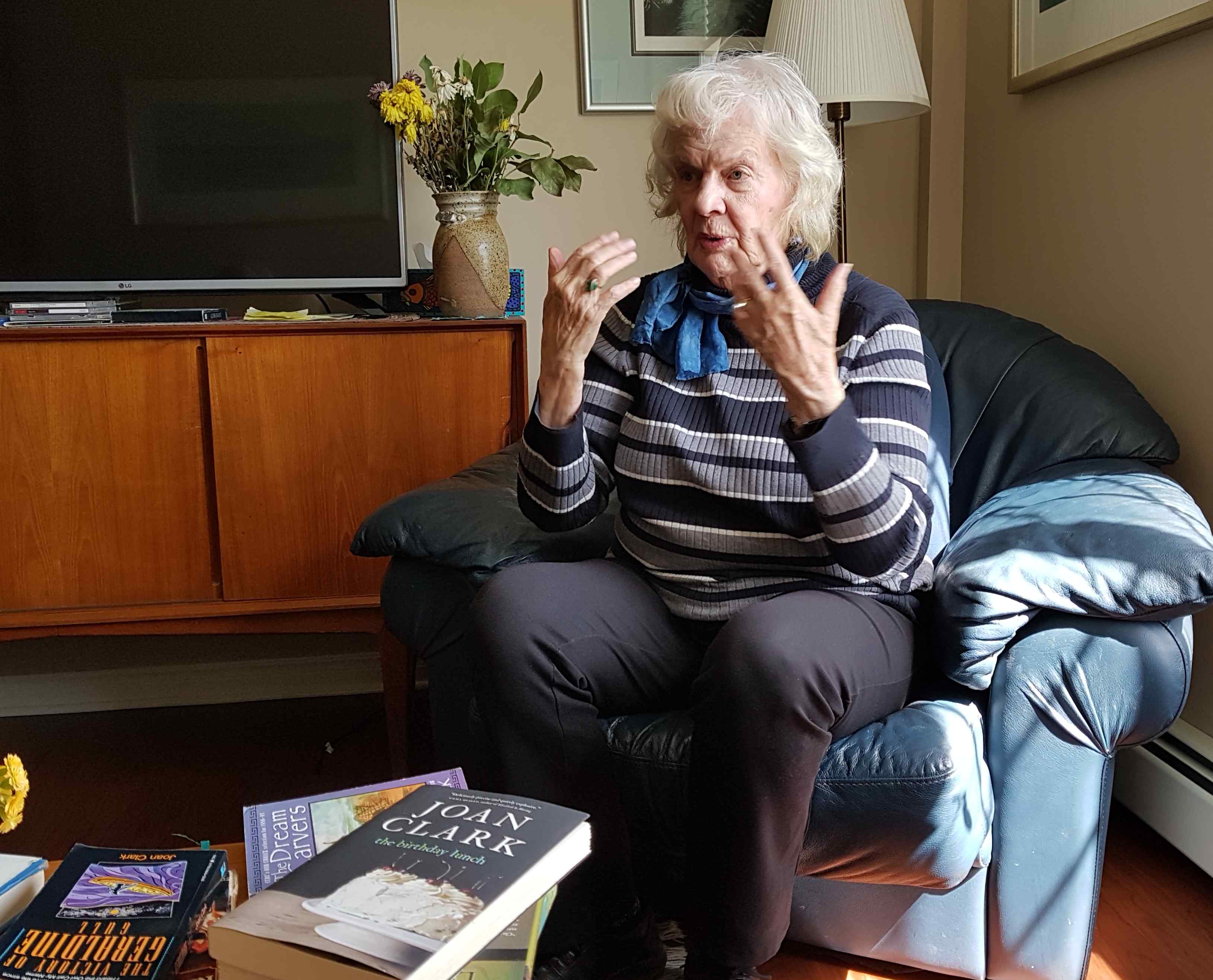 Joan Clark uses words to express herself creatively. In fact, over the course of her career she has published 16 books. Along the way, she has been recognized through a number of awards for her work in helping to shape writing in Canada. In 2010, she was awarded the Order of Canada.

“As a child I was always making up stories,” said Joan. “When I was maybe five or six years old, I recall having my toys have long conversations with each other, but I really didn’t start writing in earnest until about 22.”

She was born in Liverpool, Nova Scotia and grew up in Nova Scotia and New Brunswick. It was while attending Acadia University’s drama program in Wolfville, Nova Scotia that she began to write. “I was an English Major but never really wrote,” she laughs. After graduating, she published two books – in 1968 and 1971 – but she considers The Hand of Robin Squires, published in 1977 as her first novel. “My dad would talk about the mystery of Oak Island off the coast of Nova Scotia, so I set about to write a fictionalized story about the rumours of buried treasure there.”

Joan lived in Edmonton for a time, where she started the literary publication, Dandelion, with another author and attended university. She also served as president of the Writer’s Guild of Alberta before returning to Atlantic Canada.

In 1988 she published The Victory of Geraldine Gull while she and her husband were living on Hudson Bay. The book was shortlisted for the Governor General’s Literary Award for Fiction. A string of successful novels followed including An Audience of Chairs, a novel published in 2005 and made into a film in 2018.

“I was surprised and grateful that one of my books had been made into a film. I wrote most of the story in a cabin in Baddeck, Cape Breton,” she said. “This one was based on a relative of mine who was bipolar. She had a difficult life. To me, people are the heart of my stories.”

In 2010, Joan was awarded the Order of Canada. In part, the award reads: “In her work with organizations such as the Literary Arts Foundation of Newfoundland and Labrador, and the Public Lending Right Commission, this generous mentor has been a guiding spirit to new and established authors.”

Her latest book, The Birthday Lunch, was published in 2015. “Although I’ve written short stories (From a High Thin Wire), I’m more drawn to novels. I like the in-depth characters and the opportunity to set the mood. I haven’t written much lately, but if I find a topic that really matters to me, I might start writing again.” One of her favourite authors and literary heroes is Alice Munro. “My husband and I drove cross country to attend a lecture she was giving in Banff. I got to meet her and I was thrilled when she knew who I was and complimented me on my work!”

For Joan, character is everything in a novel. “People bring so much depth to a story.” When Joan decides to write she asks herself two questions. “Why do I want to write this, and why does it matter to me? It has to matter because so much work needs to go into it,” she said.

Joan’s husband passed away four years ago, and she made the decision to move to Calgary to be closer to her son and daughter. She chose Garrison Green, which is home to another Order of Canada winner, Joyce Doolittle.  “It’s a friendly place. Very open with lots of choices. I’m very impressed.”

While taking a break from writing, Joan has been drawn to expand her creative side. “I’ve always done some painting so I’ve started doing some work in the art studio.”